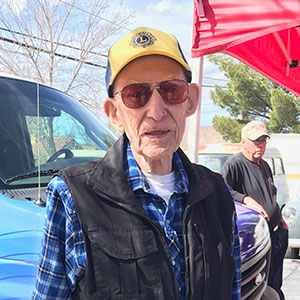 The 12th Annual Clarkdale Car Show will be held in 2023. This event was originally hosted by the Clarkdale-Jerome Lions Club and organized by Dave Andrews of Clarkdale. This show has always been scheduled for the 2nd Saturday of March. In its early years the show was held in the parking lot of the historic Clarkdale Town Hall. On display were all years, makes and models of cars, trucks, sports cars, antique cars and street rods. The large circular parking lot and historic buildings were the perfect setting for one of the finest auto shows in the Verde Valley. "Any kind of car or truck is welcome," said Dave Andrews and a People's Choice award would be given to the most popular vehicle in the show. Vehicles came from all over the Verde Valley and Sedona, as well as the entire Phoenix metropolitan area and even several entries from the White Mountains.

Each year the Lions Club would choose a worthy charity to gift the proceeds to. One year the proceeds went toward the purchase of bulletproof vests as needed for both the Clarkdale and Jerome police departments and another year donations were given to a camp for handicapped children in the White Mountains and yet another year they sponsored the free summer concerts in the Clarkdale. Local food banks also received donations from the club.

In 2015 The Clarkdale Downtown Business Alliance (CDBA) was invited to participate, so the Clarkdale Poker Stroll was organized as the business districts' contribution to the Lions Club event.

"Any kind of car or truck is welcome," said Dave Andrews

That collaboration was so well received that the following year the CDBA was asked to help with the event so the Chili Cook-off was added to the event and several volunteers assisted during the show.

At the end of 2017 the Clarkdale-Jerome Lions Club had disbanded and so it was decided with the blessing and support of Dave Andrews that the CDBA would take over the Car Show event. Today the Cottonwood Lions club still has a very active role in the show.

The Clarkdale Downtown Business Alliance and the Town of Clarkdale will be forever grateful for the Clarkdale-Jerome Lions Club and Dave Andrews for bringing America’s love affair with shiny chrome and collectable automobiles to Clarkdale as a multi-generational event for all to enjoy.